Brush Up On Muscle Action Basics

I wanted to take a minute to revisit some basics for the basic muscle actions (concentric, eccentric and isometric). Whether you are a coach, gym enthusiast or athlete, it’s important to be able to understand and differentiate between each one.

So let’s get started. In order to visualize the types of muscle actions, take a look at this figure. 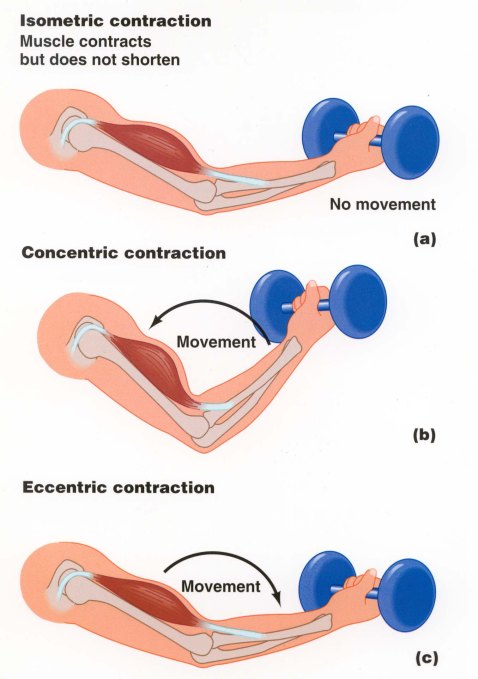 You’ll notice it fully demonstrates the starting and ending position of each muscle action, and clearly defines where movement does and does not occur. Cool, so what does this mean?

Don’t worry, we’ll chat about each muscle action in depth. A concentric action is where the muscle shortens, the eccentric muscle action lengthens and the isometric action has no visible movement and neither shortening or lengthening of the muscle.

It may help to describe eccentric as the deceleration phase, where force is reduced, the muscle is lengthened. You may also be familiar with the term “negative”, which may help, and a good example of this is when lowering weight during a resistance exercise, such as: lowering the body during a pull up, the down motion of a push up, the lowering of a biceps curl or the down motion of a squat.

It may help to describe isometric muscle action as when the force that contracts is the same as the force that is resisting, so as a result there is no visible movement. A good example of this is in between a lifting and lowering exercise, such as: pausing in between the concentric and eccentric phase of a biceps curl, pausing at the bottom of a squat between the concentric and eccentric phase, and pausing at the chest in between the lowering and lifting phase of a bench press. Another good example would include planks.

The first number will always be the lowering phase or the eccentric phase (3 seconds). The second number will be the pause, the isometric muscle action (here it would be a 2 second pause, 0 would indicate no pause). The third number refers the lifting portion or the concentric portion of the lift (1 second). And sometimes this is written as X, which would indicate as fast as possible (explosive). So you can see how this would be important to understand as you conduct your training.

One thought on “Brush Up On Muscle Action Basics”

As a PhD student and Chief Science Officer, I believe in providing evidence-based programs that are simple to follow, effective and tailored to your needs. With a Master of Science degree in this field (including published research and a 4.0 GPA), I’m passionate about contributing to and staying on top of current research. Thanks for visiting my page.