I went into this meet with one goal – get an elite total. I didn’t care about crazy PRs as I’ve basically hit all the numbers I needed before. I was only a few pounds shy of an elite total at my last meet a couple months ago. 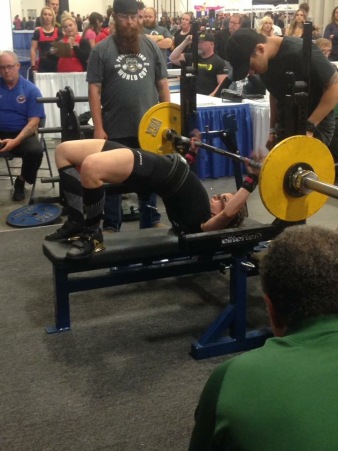 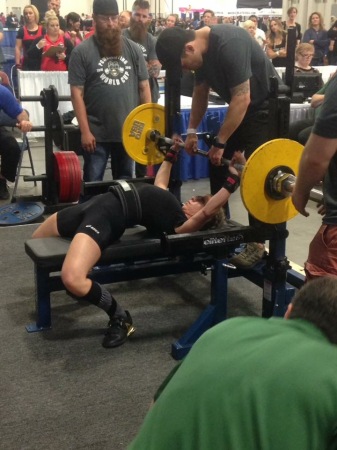 This time, I dropped a weight class, something that should have been relatively easy. But for some reason, my weight spiked a couple weeks ago and I had to do a larger weight cut than I had originally planned for. I’m going to blame some stress and wacky hormones. The morning of weigh ins (after a painfully long steam room session) I was .3 over weight. There was no way I was going to let that slide, so I did what I could (use your imagination) and came back for a second try 15 minutes later. 104.7 lbs was my final weight, just what I needed to compete in the 105 weight class. At this point, I have to mention that this weight cut left me feeling like crap through the entire meet, all the way until Monday the next week. I couldn’t even stomach a proper dinner or breakfast before lifting. I tried to choke some oatmeal down, but my body was not having it. I felt like I had the flu for 3 days straight. 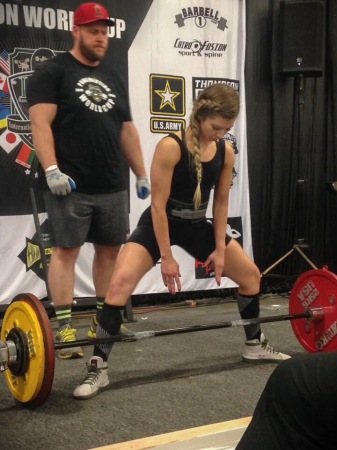 But before I get to the actual meet, let’s back up a bit for minute. Last week, when I was testing my openers, my hip starting to feel funky. It was a familiar feeling that I’ve had before so I tried not to pay too much attention to it, but I did notice how awful my squats looked in my vids. I iced and went to bed. The next day, I was in a lot of pain. My hip, my groin and my knee. I spent the rest of the week babying it as I had no intention to back out of the meet. Come meet day, I still wasn’t better. I slapped some numbing cream on my leg and took a pain killer. Not the smartest thing to do, but I wanted this total so bad and knew I could still do it injured. I do not recommend that anyone do this – ever.

Squats were up first, and yours truly was first in flight A. Wonderful. I’m usually fine with nerves, but not when I’m very first. I started with an easy 198 opener, ugly but nailed it with ease, but then missed my rack command. Cool. I watched it back a few times, and it was an excessively long hold, but that doesn’t matter. I should have been paying attention. I also couldn’t hear anything – it was pretty loud. So instead of making a big jump I opted to only hit 208 for my second attempt (something that I’ve hit many times easily). In my descent I could literally feel my hip pop out of place (you can see it on the vid) and barely pulled out of the hole. Lift was fine, but it hurt. My final attempt was my old PR of 214. I did hit it, but again, it was excruciating. This is not how I squat usually – it’s quite embarrassing actually. I literally have zero hip control. But I knew if could get through squats I’d be smooth sailing (with my hip pain anyway).

Bench was next. I hit an easy opener at 121. Next attempt was 128. I unracked it, and my wrists felt off. Rather than racking it and setting up again (I thought this might mess with my mental game too much) I thought it was light enough that I’d be fine. Wrong. I missed the lift as it stalled about 7 inches off my chest. And for my third attempt I was too nervous to hit 132, which is something I have hit before. So I went for 128 again and hit it with ease. Literally flew up with no problem. Damn. This would be the biggest mistake of my day for sure. I should’ve had a little more confidence in myself and made the jump that I needed to make.

So now I was in a tricky situation. To get my elite total, I’d have to pull a little bigger deadlift than I expected since I didn’t attempt my planned bench. I’d have to pull a PR of 275. I’m not even sure I could hit 275 at my heavier weight, without an injury and when I was feeling 100%. But nevertheless, I knew I would try it anyway. I didn’t go through all this not to try. I hit my first two deadlifts just fine (250, 264). Easy. And got as hyped as shit for 275. At this point I was so confident, I knew it would my adrenaline would help me get it off the floor. For the last year or so, I’ve never dropped a deadlift at lockout – the floor is almost always my sticking point. So usually once my quads kick in, I’m good. I pulled it slowly of the floor and the bar started to move, I actually couldn’t believe it. And for a second, I thought I had it. But as I approached the top half of the lift, I realized that my shoulders were not in a good position and I couldn’t lock out my hips. I tried locking out my legs early in hopes that my shoulders would follow suit, but that didn’t happen. I simply got stuck, and couldn’t lock out the top. Possibly due to my hip pain, but that definitely wasn’t all of it. But I know one thing for sure, I fought for it for what seemed like 60 seconds. As I dropped the bar I wanted to fall forward to the ground (I’m dramatic) because I could literally feel my heart break in front of me. Of course I was devastated. In fact, I threw a nice little 2-minute tantrum as I stormed to the back LOL (sorry to any if I offended you – it’s me not you lol), but I quickly got over it. I realize now I have bigger problems to work through (hip injury) and I’m hoping that it doesn’t take me out for long.

So for those asking, my plans are to rehab this injury (prayers it’s nothing serious), hopefully start a little nice off season to work on some things and I’ll be back on the platform by the end of the year. Thanks for everyone’s kind words, messages, recording my lifts and any other support. It sucks waiting, but once I get there it will feel sooooo much more victorious.

Wife, mom, and body transformation coach. As a bikini competitor turned powerlifter, I love sharing my journey of finding health, strength and self love. I hope it helps you too.  Thanks for visiting my page.

© Natalie Suazo and NatalieAdairFit, 2019. Unauthorized use and/or duplication of this material without express and written permission from this site’s author and/or owner is strictly prohibited. Excerpts and links may be used, provided that full and clear credit is given to Natalie Suazo and NatalieAdairFit with appropriate and specific direction to the original content.